My owner is an eight-pound miniature dachshund. I’m a grown ass man, but that dog wears the pants. Why else would I feed her on an exact schedule every day? Why would I take her for long walks, stand in the rain as she defecates, provide a warm lap and fresh hot towels for her to burrow into? Yes, we all love our pets. So it follows that I would do these mundane tasks out of love, right? Wrong. Maybe that’s the case for you; maybe you haven’t had “the incident” yet. But I have.

My dog can talk. Not metaphorically; I’m talking full on Now-I-Know-My-ABCs verbalization. The first time she spoke, I thought it was the coolest thing. I saw dollar signs, guest spots on Maury, an elaborate ventriloquist act. But once my pea brain processed the dog’s first words, reality sank in.

I was putting on my underwear at the time, getting ready for work. “What did you say?”

I began to mouth the first syllable of “Tell about what?” but stopped. Did it matter? Your pet knows more about you than anyone in the world. It knows you color your hair. It knows you spent last Tuesday watching Never say Never with the curtains drawn–that you purchased the All-Day Loop on pay-per-view, and cried into your pint of Rocky Road each time Bieber took the stage. It curled up on the edge of the couch and watched you whisper, “Never say never, Justin,” as the credits rolled.

Let me offer these words of wisdom: When you are alone with your pets, you’re not alone. They’re watching. So feed your pets on a schedule, take them for long walkies, provide a warm lap. Or one day, they’ll look up at you while you’re putting on a pair of dirty underwear and say, “I’ll tell.”

Burklin, the main character of Nether, has this problem. His soul is trapped inside his dachshund, giving the dog heightened intellect and the ability to speak. But Burklin keeps worse secrets than yours; his secrets could destroy the world. 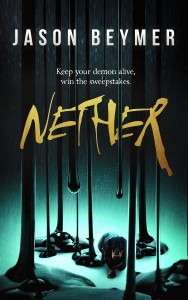